Cyrodiil is a large area which dominates central Tamriel and in Elder Scrolls Online it is the setting of the Alliance War which is where all of the PVP (Player Vs Player) action takes place. PVP in ESO can be complex and is a little different from other games. This guide has a bunch on information about PVP, how to get into Cyrodiil, the mechanics at work in Cyrodiil, campaigns, siege weapons, keeps and more.

What And Where is Cyrodiil?

Cyrodiil is that large space right in the center of Tamriel. In Cyrodiil you can participate in the Alliance War. This means that players from opposing Alliances can attack you and you can attack them. Players of the same Alliance are allies and can’t fight each other. You can take keeps, fight for control of the Elder Scrolls and crown an Emperor for you Alliance.
You can’t simply walk to Cyrodiil though, even though it borders a zone from each Alliance. You have to join a campaign first and then travel to Cyrodiil. 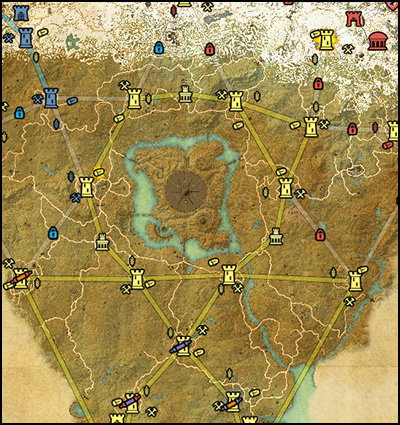 What is a Campaign?

A campaign is like a separate instance, or separate server / shard, of Cyrodiil. Each campaign looks exactly the same and consists of the same land and keeps. Campaigns are a way of splitting the population of Tamriel up into different servers to reduce lag and increase performance. Campaigns also allow for different rules – like the non-Vet campaign which only allows players who have not yet reached Veteran Rank 1 to join.

To access any of the campaigns press ‘L’ or open the Alliance War screen from the top menu.

You can press on the “Campaigns” tab at the top to take a look at all of the current campaigns and show the population of each campaign.

You can set both a home and guest campaign for each of your characters. A home campaign is where you should spend most of your time. A home campaign lets you travel to Cyrodiil via a wayshrine and you will be able to participate in the leaderboards and attempt to become Emperor.

Once you have set a home and a guest campaign you can click on a campaign that you have chosen and select Travel To Cyrodill to join in. Sometimes there might be a queue as the campaign is full.

When you enter Cyrodiil below VR1 you will notice an increase to all of your primary stats like Health, Magicka and Stamina. This is because you are Battle Leveled. This system is designed to increase the stats of players to about VR15 level to even the playing field for PVP. An actual VR15 player will always be better off due to gear, passives and Skill Points.

It is wise to consider turning off Battle Level (Settings>Game Play>Battle Level) when you reach levels 45-50 as it is possible that Battle Level is actually reducing some of your stats. It varies depending on your particular situation with gear and passives, etc.

Once you are in a campaign and have traveled to Cyrodiil you can begin! If it is your first time you will have the option to complete a short tutorial which is recommended for new players. This tutorial will teach you the basics of keeps, sieges, siege weapons and scrolls. If you missed it or skipped it all of that information is available right here. 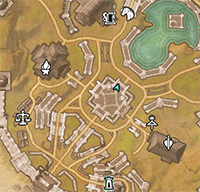 Arriving in Cyrodiil will place you at one of the two entrances of your Alliance. Your Alliance has two entrances which hold wayshrines, shops, siege merchants, banks and other helpful NPCs. These areas are safe and players from opposing Alliances can’t attack you here.

The main method of transportation in Cyrodiil isn’t wayshrines it is the transitus network. This network connects the keeps that your Alliance has captured and lets you teleport to them. If a keep is under attack, or is cut off by an enemy keep you can’t teleport to it and will have to get there manually. You can see your transitus lines on the map.

Part of tactics in Cyrodiil involves cutting off enemy transitus lines and then cutting off the reinforcements travelling over the land to the battle.

As you fight in Cyrodiil you will level up your PVP Rank which also levels your Alliance War Skill Lines which can provide you with some nifty skills to use in PVP. There are 50 PVP Ranks and each couple of levels grants you a new title. You will also gain a Skill Point for each PVP Rank.

Siege equipment includes all of the weapons and equipment which is useful in a siege – things like ballista, boiling oil, rams, trebuchet and catapults. You can purchase siege weapons from a Siege Merchant located at each entrance for your Alliance and also in each of your captured keeps, resources and outposts.

Jump to Siege Equipment for more detail on all of the siege weapons and equipment available.

Keeps are probably the most important or most common aspect of fighting in Cyrodiil. Scattered around the place are large forts and castles which can be captured by each of the three Alliances. Keeps all have an outer wall and an inner fort. They all follow a similar layout however the terrain and some specifics vary from keep to keep.

Captured keeps allow the transitus shrines to work and this allows easy and quick movement around the battlefield.

Resources are the three mills that surround each keep. There is the Lumber Mill, the Farm and the Mine. If your Alliance owns a keep thoses resources will level up over time and provide bonuses to the defense of the keep.

The Lumber Mill gives the doors of your keep more strength.

The Farm gives the NPC guards of your keep more Health.

The Mine gives all of the walls of your keep more strength to take more hits.

Resources are important and if your keep loses all of its resources to an enemy this will cut off transitus transportation.

This might sound simple but it can be a long and complex process. It is often wise to take at least one resource of the keep before attacking as this will give you an area to fall back to if things get tough. You can use the support of friendly NPCs at that resource to defend your allies when you do have to fall back. Taking a resource may alert the enemy of your presence, however, and might result in quick reinforcements of defenders.

The outer wall is strong and large. Siege weapons will be required to break it down. Stone Trebuchets and Ballistae are the best at damaging a keep wall. If your Alliance gathers enough players to operate the siege weapons the wall can come down in a couple of minutes. Defenders of the keep will, of course, try to destroy your siege weapons and kill your allies. They might also use siege weapons like Fire Ballistae and Boiling Oil to defend the hole in their wall.

Once the wall is down your Alliance can pour in and start to take down the inner wall. There are NPCs inside the keep wall and these are Veteran Rank 12 so they can be a pain. Enemy players are even worse and they can be sneaking about ready to attack your allies on siege weapons.

The inner wall is similar to the outer wall and will eventually fall if enough siege weapons are operating and you are not killed by the guards or by defenders. There is also a front door which can be opened with Rams however this is defended pretty well and enemy players can rain down Boiling Oil on to your allies while they are trying to break open the door.

Once the inner wall is down your Alliance must storm the keep and take the two flags inside. Flags will convert to your Alliance if enough allies all stand on the flag at the same time and remain alive for about 20 seconds while the flag changes. There are two flags inside the keep. The flags will be heavily guarded by NPCs and players and due to the close quarters things can get confusing! There are archers and mages on the top level, up some stairs on either side of the flags, and these will fire damaging arrows and fireballs while you are trying to take the flags.

It might take your Alliance only 10 minutes to take a lightly defended keep with enough players. It might also take several hours of painstaking work to take a fully defended keep. Your Alliance might also be “wiped” which means that all of your allies were slain and it is likely that the enemies defending the keep will launch a counter attack towards your own Alliances closest keep.

Outposts are small forts located between two keeps which can be captured by an Alliance. There are only three outposts – Sejanus, Nikel and Bleakers – and these are near the centre of Cyrodiil and separate the home keeps of each Alliance. Outposts are much easier to capture compared to keeps as they only have one wall to break through and one flag to capture inside. Outposts are defended by several NPC guards and often enemy players as well.

Siege weapons and equipment plays a large role in many battles in Cyrodiil. Taking and defending keeps and scrolls is vital to your Alliance’s performance in PVP and using siege equipment is very important to both of these tasks. Below is a list of all the siege equipment available and the damage that each item deals. The damage of siege weapons has just been updated and this list reflects that. There is also a little description of each item and the best uses for each item taking into account damage, reload time and efficiency.

The Elder Scrolls are very important in Cyrodiil. There are six scrolls and these all have a home temple where they are supposed to reside. Scrolls give useful bonuses to players of your Alliance if you have them inside the temples. You can also take enemy scrolls from the enemy’s temples and house them in one of your captured keeps. This will give your entire Alliance even more bonuses.

All temples are located behind gates near the entrances of each Alliance. These gates don’t open unless an enemy Alliance has taken the keeps leading up to the gates. 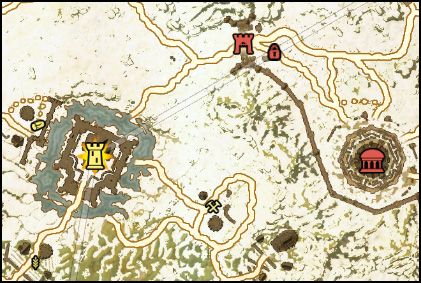 In this example the AD (Yellow) has taken the keep outside the EP (Red) gate. This forces the gate open and access to the scroll temple is permitted. The AD in this image has taken the scroll and now the EP is fighting back and attacking the keep.

If your Alliance captures all of the six inner keeps which surround the Imperial City in the centre of Cyrodiil then the player in your Alliance with most Alliance Points at the time will be crowned Emperor.

If your Alliance has an Emperor then you and your allies will all gain a significant Health bonus. Being crowned Emperor is a significant achievement and will unlock a title and a dye color plus a new Skill Line. When a player is Emperor they will gain many bonuses to their stats which will make them very powerful compared to other players. It is possible to kill an Emperor, however, and this awards an achievement.

An Emperor will remain crowned until all six inner keeps have been lost. The now ex-Emperor will lose most of the bonuses but will retain a couple of small bonuses from the Emperor Skill Line.

Being crowned as Emperor is a difficult task which is out of reach for most players. To be at the top of the leaderboards takes a lot of time and maintaining that position requires significant play time.

The Imperial City is located in the centre of Cyrodiil and is another place in which you can PVP.