In Elder Scrolls Online all characters can block, regardless of the weapon type equipped. If you block an attack you achieve a number of things. You will reduce the damage of the attack by half (or more with certain passives), you will use some Stamina (the amount scales with your Level) and you prevent secondary disabling effects from applying. You won’t regenerate Stamina while you remain blocking.

When you are blocking you’ll reduce your incoming damage by at least half.

You can increase the mitigation of a successful block through certain Skills like the Sword and Board, Deflect Bolts and Defensive Posture Skills from One Hand and Shield as well as Iron Skin (Dragonknight) and Spear Wall (Templar).

In some situations blocking is very necessary to avoid death for all characters, like against difficult bosses in Group Dungeons, Trials and even some World Bosses.

One of the best effects of a successful block is the negation of any secondary disabling effects like stuns, knockbacks, snares, roots and other negative effects. This is very useful in all situations, especially PVP or difficult PVE content.

If the enemy is an NPC and is winding up and Heavy Attack (white lines) you can block the attack and this will cause the enemy to become off-balance and susceptible to a knock down from your own Heavy Attacks.

The Stamina cost of blocking changes with your Level and is a flat amount for each Level, not a percentage of your Max Stamina.

You can reduce the cost of blocking through several methods including jewelry enchants, Champion Points in Block Expertise and Skills like One Hand and Shield Fortress and Defensive Posture and Heavy Armor Bracing.

As of Update 7 (Imperial City), blocking also stops your Stamina from regenerating. This was as a result of “perma-blocking” where some tanky characters were able to remain blocking for entire encounters. ZOS states that blocking was always intended as a mechanic which had to be used sparingly and when necessary. You can still receive Stamina from other sources while blocking such as from potions. 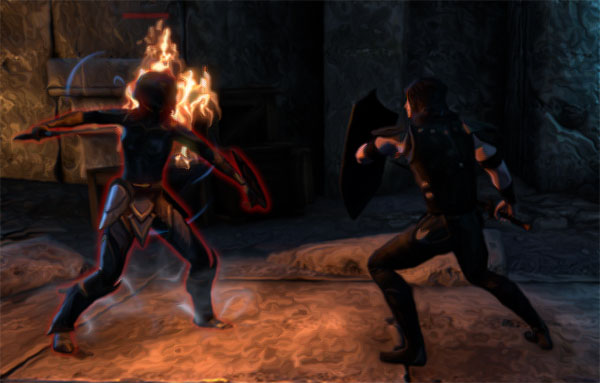 A Bash attack is performed when you Light Attack whilst Blocking. Your character will Bash the target which has the effect of interrupting abilities and setting the target off-balance.

It’s important to interrupt many dangerous boss enemies when they are performing a channelled attack (indicated with the red lines). A Bash attack uses Stamina to perform and also deals damage to the target. If you successfully interrupt a target using Bash then your Bash attack will deal more damage.