There are three types of dungeons in ESO which are designed for different styles of play and different amounts of players.

Public Dungeons are large and expansive dungeons filled with enemies, bosses and a couple of quests. There is one Public Dungeon in each zone, except for the Starter Islands and Cyrodiil. Public Dungeons are open to everybody at the same time and will not scale to your level. You will often meet other players inside completing quests. The enemies inside these dungeons often come in large packs which can make exploration difficult without fellow players to help you. Public Dungeons often come with a main quest and several side quests which take you throughout the dungeon and often give trophy or collectors items as a reward.

There are several bosses in Public Dungeons which, upon slaying them all, will reward you with an Achievement. Once you have completed all of the Public Dungeons in an Alliance you will unlock a new dye color specific to your Alliance. Public Dungeons also feature a Group Challenge – a difficult boss with several adds – which is best completed with a few other players. The Group Challenge rewards a Skill Point upon completion so it is worth the time to comlete. It can be difficult to find the Group Challenge and the boss requires activation – often by interacting with an object in a room such as a flame or an item.

Auridon > Toothmaul Gully
A cave in central Auridon, southwest of the town of Mathiisen.

Grahtwood > Root Sunder Ruins
A set of Ayleid ruins between Elden Root and Haven in Grahtwood.

Greenshade > Rulanyil’s Fall
An Ayleid ruin in central Greenshade, northeast of the city of Woodhearth.

Glenumbra > Bad Man’s Hallows
A cave to the west of Daggerfall in Glenumbra.

Stormhaven > Bonesnap Ruins
A ruin about halfway between Koeglin Village and Wayrest in Stormhaven.

Eastmarch > Hall of the Dead
A tomb in Windhelm.

The Rift > The Lion’s Den
An isolated valley in the Rift.

Stonefalls > Crow’s Wood
A pocket plane of Evergloam accessed via a cleverly disguised portal in Davon’s Watch, in Stonefalls.

Coldharbour > Village of the Lost
A plane containing three villages trapped between Coldharbour and Mundus.

Cyrodiil > Imperial Sewers
The sewer system of the Imperial City. 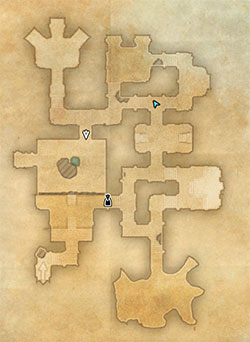 Delves are the most common dungeon in ESO and can be found in nearly every zone in Tamriel. Delves are small dungeons which can be completed solo or in a group. They will not scale to your level as they are publicly available.

Inside Delves it is common to find several enemies, a boss near the end, a Skyshard and a Lorebook. It is worth exploring Delves and they can make a great source of Skill Points via Skyshards.

Some Delves are Dwemer Ruins, such as Bthzark in Stros M’kai and Avanchnzel in The Rift, which provide good locations to hunt for Dwemer Scraps and Dwemer Motifs.

Group Dungeons also feature a quest which can be completed whilst you go through the dungeon and will reward you with a Skill Point.

According to the developers (in the video below) Group Dungeons were designed for a group with two damage dealing players, one tank and one healer. Group Dungeons are flexible in different ways and will require different things from each player. Certain dungeons may require more damage from the tank and healer in order to quickly defeat a difficult boss and others may require the damage dealing characters to survive on their own, without a healer, for a temporary time.

There are several bosses in a Group Dungeon which often have different strengths, weaknesses and abilities. Some bosses have high damage burst attacks which must be healed through while others will test your group by pinning down a random member temporarily.You will learn the complexities of each Group Dungeon by completing them, or you can search for specific guides or videos for a boss you are having trouble with as there are several “walkthrough” videos available on YouTube for each Group Dungeon boss.