Edit: The patch notes for Update 7 (on the Public Test Server) are up and you can view a summary and all skills changes here.

Update 7 is on track to be a huge update to Elder Scrolls Online including the new Imperial City DLC zone. We won’t have official patch notes until it goes to the Public Test Server so in the meantime this page will keep track of all information regarding Update 7 sourced from the developers on the forums, Reddit, ESO Live and even some data mining of ESO itself.

We can’t be absolutely 100% certain of these changes until they are released to ESO itself, as the developers will be testing them internally and on the PTS which may result in some changes. This page will be kept up to date with those changes once we know of them.

The level cap in ESO is being raised to Veteran Rank 16 in Update 7.

This means that gear can now be made up to VR16 with new materials which will only be found in the Imperial City. The new materials will not spawn on nodes like other materials in the game but you will need to find items (from monster loot or stealing) and deconstruct them. This will give you materials required to make VR15 and VR16 weapons and armor.

Group Dungeons and Pledges will scale up to Veteran Rank 16.

Brian Wheeler posted this in response to questions about the materials needed to make VR15 and VR16 items.

The new materials are nowhere near as rare or difficult to obtain as Nirnhoned Trait materials. Though you don’t obtain the new materials via crafting nodes, getting them through deconstruction is more comparable to other types of ingots. As you run around the Imperial City killing monsters, you’ll get item drops like you would in a normal overland zone or dungeon. You can then deconstruct those for a chance to get the new materials.

Along with the introduction of Veteran Rank 16 there is going to be an all round reduction in the time it takes to level a Veteran Rank. 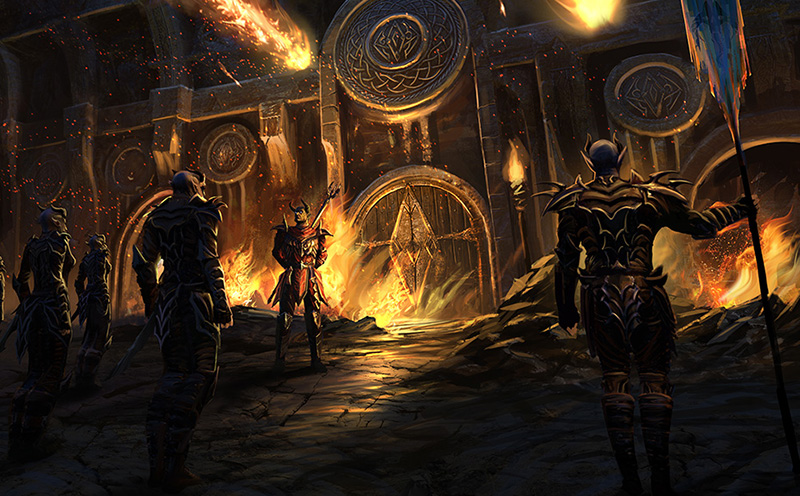 The Imperial City will cost 2500 Crowns from the Crown Store. This zone is the first paid DLC for Elder Scrolls Online.

On the PTS they will be testing different requirements to access the Imperial City. This information comes from BrianWheeler on the forums.

The data collected from the PTS will be used to determine which scenario will launch. It is always possible that this will change in the future as well. At the moment it seems like the first choice is most popular with the developers as this is the scenario that is advertised on the Imperial City pages of the official site.

Also note that you can log out and remain in the Imperial City as evidence by Brian Wheeler on the forums.

This was recently posted to the forums by Brian Wheeler.

There will be safe areas and re-spawn locations for you inside the Sewers as well as the City Districts. Also note the City, Sewers and Cyrodiil are separate zones, but share the same population cap. Prior bugs where sometimes you had to requeue to get back into Cyrodiil from Cracked Wood Cave, or any other cave in Cyrodiil, have been fixed in this update.

We know there are two new Group Dungeons – The White Gold Tower and the Imperial City Prison. We also know that once you discover them for the first time you can then enter the dungeon like normal from outside of Cyrodiil. You can also exit Imperial City by going through these Group Dungeons. You won’t gain or lose any Tel Var Stones in here either.

You do have to discover the dungeons first, but after that, you can queue up for them outside of Cyrodiil or the Imperial City.

There will be 3 crafted sets which can be made at specific crafting stations located in districts of the Imperial City.

There will also be 20 new dropped sets. At the moment we don’t know what these are or what they will do. We know that there will be merchants which sell VR15 and VR16 gear in the Imperial City in exchange for Tel Var Stones. This might provide another way to get your hands on some of these new item sets.

Eric Wrobel stated in ESO Live 21 that the developers want to create an even playing field with regards to item sets. At the moment there are a couple of really powerful sets however ZOS want to balance the item sets a bit more. In addition ZOS want to ensure that there is a balance between crafted, dropped and purchased item sets.

Crafted – Set of the Redistributor

5 Items Bonus:
When you are at full health, and cast an ability that would heal yourself, heal an ally within 28 meters. 2 second cool down.

Crafted – Set of the Armor Master

Crafted – Set of the Arboretum

You can visit the Tel Var Stones page for even more information including a list of items that you can purchase with the Stones.

Here is more info from the forums.

You will have the option of depositing Tel Var Stones into the bank, but there are some minimum restrictions in place. Additionally, you will lose all of the stones on your person when you die in PvP. Both of these exact values are still subject to change as we continue to fine tune the system based on our logs and player feedback.

There is a lot of balancing going on behind the scenes and therefore a number of changes to skills. The ones that we know about are listed below.

Battle Roar will scale resource returns based on your Max Health, Magicka and Stamina.

Shadow Cloak fixes are coming. Attacks like heavy attacks and charges won’t remove invisibility even if they are cast just before you go into stealth. Area of effect attacks will still remove Shadow Cloak.

Focused Charge now has no delay after casting it like the other gap closer charges.

Honor The Dead Magicka return will trigger instantly if target is below 70% Health.

Sun Fire is getting a faster animation / travel speed.

Lightning Form is going to have a Stamina morph which deals reasonable damage to nearby targets and uses Stamina to cast.

Flying Blade will give Major Brutality which increases Weapon Damage by 20%. This is to bring Dual Wield in line with Rally (2H).

Volley will have a longer duration.

Vigor will be unlocked at Alliance Level 5.

There are some slight tweaks to some of the racial passives that we know about. Eric Wrobel stated in ESO Live that larger changes to racial passives might occur when a race change mechanism is added to ESO in the future.

Restore more Health, Magicka and Stamina after drinking a potion.

Update 7 will improve the balance of Mundus Stone buffs in ESO. The Mage (Magicka) and The Tower (Stamina) will remain the same but the others will provide a slightly larger bonus.

The Serpent (Health Regen) is changing to increase Stamina Regen instead.

Dodge Rolls will cost 33% more Stamina if you perform them in quick succession.

At the moment the developers feel that players can dodge roll too many times in succession as they believe that dodge rolling should be a timed manoeuvre rather than a constant buff.

When you are blocking you will no longer have any Stamina Regeneration. This is a major combat change to reduce block casting (holding down black while attacking).

Potions and Skills will still restore Stamina but your normal Stamina Regen will be nothing.

Eric Wrobel mentioned that internal tests showed that current content (Group Dungeons, Trials, Dragonstar Arena) is going to be possible to complete even with this change. It might take some time to adjust, however, especially for tanks! This change is mostly aimed towards PVP where players would often treat blocking as a constant buff.

There are quite a few changes and fixes to Cyrodiil besides the addition of the Imperial City.

You will no longer receive the “former Emperor” buffs if you have a character which has previously been crowned as Emperor. Instead you will have access to all of the Emperor buffs in full while you are actively the Emperor of a Campaign. You won’t have to spend any Skill Points when you become Emperor. If you have spent Skill Points in the Emperor Skill Line then you will be refunded these points to assign elsewhere.

The “travel to player” function used to enter a Cyrodiil is being disabled. You will now be restricted to your Home and Guest Campaigns which can be reassigned by spending Alliance Points. ZOS wants players to reduce movement between Campaigns in order to provide more meaningful fights and battles in the long term. This will also impact players with many characters, however, as they find that they can’t join any Campaign as their other characters have set Home and Guest Campaigns.

This also means that PVP does not have as much of an impact on PVE.

ZOS is reducing the number of line of sight checks that certain abilities perform in order to reduce the lag that some players experience in Cyrodiil. There are also some other behind the scenes fixes in the works.

The Gates which lead to the Elder Scroll Temples of each Alliance are being strengthened (fixed) to prevent players getting over them when they are closed. The Temples themselves are also receiving a protective barrier when the Gates are closed to prevent any players who have managed to get through the closed Gates attacking the Scroll.

This was also posted on the forums back in June.

Players participating in a low population Campaign or as part of an underscoring Alliance will now gain 20% more AP within the Campaign they’re earning that bonus for, instead of 10%. Population polling has also been sped up to apply the underdog/low population bonuses more often; however, this also means they have the opportunity to expire faster.

There are some notable changes to some Campaigns and the way that the score is calculated for each Alliance.

Taunt immunity will only apply to monsters which are effected by multiple players Taunts.

This trait will only effect the piece of gear that it is on, rather than your total Spell Resistance. This is more of a bug fix than a change. At the moment the Nirnhoned Trait increases your entire Spell Resistance by a percentage however it is supposed to increase the Spell Resistance from individual armor piece.

On the forums Jessica Folsom suggested that a new Enchantment was being added in Update 7. So far we don’t know any details except that it will only be available in the Imperial City. You can trade it with other players though.

We’ll have more details about to share about both topics in the next week or two.

These are just bits of info from the forums and ESO Live which do not concern a particular feature of Update 7.

We are working on more Trials for the future, just not as a part of Imperial City.

We are discussing various XP gains via PVP but not ready to post about them yet.