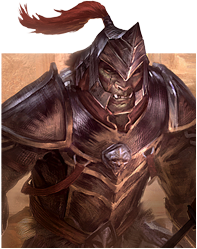 Though other races often regard the Orcs as barbarians and even beasts, these noble warriors have an ancient culture forged from endless warfare in their harsh mountain homelands. Orcs live under a simple code of honor by which the strong survive and the strongest rule. As the greatest smiths in Tamriel, their weapons and armor are prized by warriors everywhere. During the reign of the Second Empire, when their kingdom of Orsinium was finally granted provincial status, its restoration helped solidify their devotion to the new Daggerfall Covenant.