Taunts in ESO are abilities which force a non-player enemy to attack you for a certain amount of time.

Why is this useful? Taunts allow tanks and other characters to draw the attention of hard hitting bosses and monsters to themselves thus defending their allies. The enemies and monsters in Elder Scrolls Online can be pretty smart – they know that healers and damage dealers might not have the best defense so they will often attack these type of characters first. This is where Taunts come to play. Tanks can Taunt the enemy, forcing the enemy to attack them rather than the vulnerable healers and damage dealers.

There are only two Taunts in ESO at the moment.

Puncture is from the One Hand and Shield Skill Line so any character with a sword and shield can use this ability. It is the first skill in the 1H/S Skill Line so it is fairly accessible to all players. Puncture applies a 15 second Taunt to one enemy and also applies Major Fracture which reduces the armor of the target. Puncture also deals a little damage to the target.

Puncture uses Stamina and provides the most common Taunt in ESO, especially for the lower levels.

Inner Fire is from the Undaunted Skill Line which is leveled by completing Group Dungeons. Inner Fire also applies a 15 second Taunt to a target. Inner Fire is the only ranged Taunt in ESO and thus is a popular option once characters unlock it. Inner Fire uses Magicka to cast, however the Inner Beast morph option transforms the skill to use Stamina instead.

Inner Fire is also very common for tanks to use due to its long range.

Taunting in ESO can be different compared to other games and other Taunt mechanics. You will notice that the only Taunts in ESO are single target abilities as there are no area Taunts at this time. This is a design choice by the developers with regards to the tanking role. Tanks in ESO are not expected to draw the attention (or aggro) of all of the enemies in a fight. This will often lead to the tanks death.

In ESO the tanking role is designed around the ability to select the most powerful enemies in a fight and Taunt them while letting allies take care of the other enemies. As with most things – it depends on the situation. In Group Dungeons it is normally the case that the tank should Taunt the bosses, and perhaps a couple of hard hitting enemies, while the damage dealers quickly deal with the other enemies. 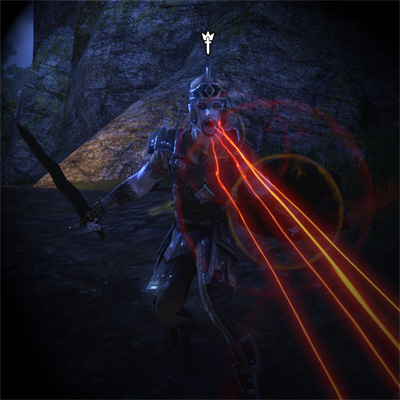 Taunting can also have other effects like control of an enemies movement and position. If you have Taunted a boss then you can walk away from your allies and force the boss to face in the opposite direction to your vulnerable allies. This can be of great benefit as some bosses have frontal area of effect abilities which can deal a lot of damage.

There are some bosses which have attacks which ignore the effects of a Taunt ability. So a boss might be Taunted but every now and then continue to deal a special attack to random players.