The Maw of Lorkhaj is a new Trial in the Thieves Guild zone of Hew’s Bane.

An ancient Khajiiti shrine called the “Temple of Seven Riddles” has been overrun by the Khajiit’s eternal enemy, the dro-m’Athra. With each passing hour, more Lost Cats pour into Nirn through a gaping rift between worlds. If Tamriel is to be saved, this Maw of Lorkhaj must be closed.

The new Trial will scale up and down the meet the Level of the group leader. This is the first Trial to scale! It will also come with two modes of difficulty Normal and Veteran. Normal will be easier but with a reduced drop rate on valuable items and Veteran will be very difficult to complete. To compete in the leader boards you must finish the Trial scaled at Veteran Rank 16 and with the Trial set to Veteran mode.

The last boss on the Veteran mode will have a Difficult Mode which you can activate before the fight. This is the hardest content that ZOS have designed to date.

An ancient Khajiiti shrine known as the Temple of Seven Riddles has been claimed by the dro-m’Athra—ancient, moon-hating spirits from the heart of the Great Darkness. The monks residing within the temple, led by Moon Bishop Kulan-dro, have all been corrupted and possessed. Now they lurk within the shadows of the Temple, preparing to spread their dark influence to the Khajiit of Elsweyr and beyond. Fearing the worst, the Moon Bishops have dispatched a group of Twilight Cantors to the scene. But even these powerful monks are no match for the evil within the temple. The order’s leader, Chief Crier Adara’hai, asks for the player’s help in banishing the dro-m’Athra and resealing the boundary between Mundus and the dark realm of Namiira.

There are 2 bosses in the Maw of Lorkhaj and 3 other major encounters which grant boss loot. They get harder and require more coordination as you go along. 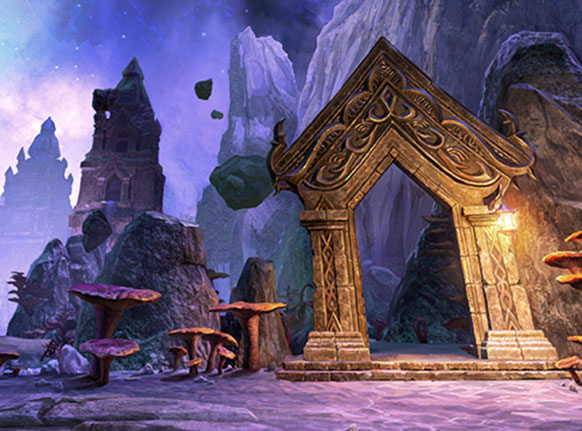 A Scene From Maw of Lorkhaj Trial

The Maw of Lorkhaj will drop 4 all new item sets which “grant unique, group-based PVE bonuses”. There will be different drop rates in the Normal and Veteran versions of the Trial but both versions will drop all of the sets.

The 4 sets all grant Minor Slayer as the 3 item bonus. Minor Slayer increases your damage against all boss enemies by 5%. The 5 items bonuses for all 4 of these new sets involve synergy abilities. They will grant bonus stats to your own character when you activate a synergy.

The following excerpts are taken from developer responses on the forums and ESO Live.

You will need two tanks through almost all of the Trial. We use a lot of factors to balance and try and look at more number levels that players can reach. So, for instance, we take a look at the numbers that DPS can push at VR16, how much Health tanks have and damage they can mitigate, how much healing can be pushed out and then go from there.

Maw of Lorkhaj will be added to the Trial rotation.

The story of the Trial is self contained, not related to the zone Hew’s Bane or the Thieves Guild.

There are different drop rates in Normal and Veteran for different items.