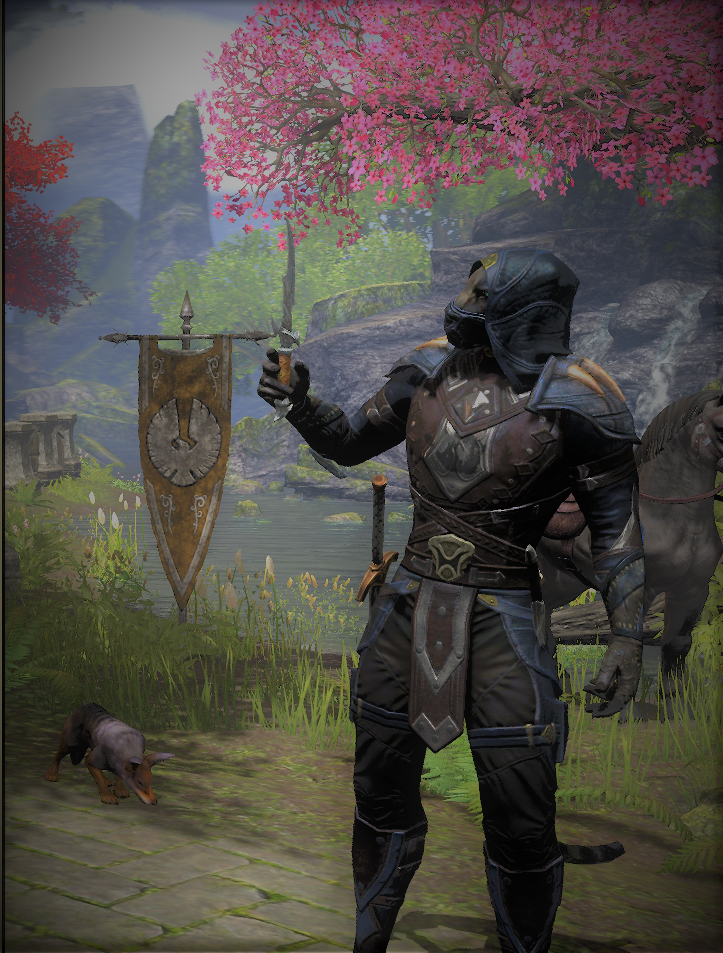 Still Looking for a good set to run with this build. But any set that boosts or fortifys stamina will work. Also everything changes at CP160.

divines and fortified help as well

my Boon is The Serpent for stamina recovery but depending on what you feel your lacking you can hunt down The Tower, The Shadow or The Thief as well.

youll most likely want magicka and health jewelry as well, though I dont use them (mostly because  i need all the stamina at this point of my builds leveling), but I can see how they would help.

and if you unlock Dark Brotherhood and Theives Guild it wont even matter what your armor looks like, just throw on a costume and INSTANT ASSASSIN.

or for the more Role Playing style like I will be going for, learn to craft in the Dro-M'athra style (on sale this weekend!) and use one of the craftable set locations around. I admit im still on the hunt and this is probably where this build is weakest, but it also leaves alot of room for personal preference and style.

"The moons shine brightly at night. But where the bright pale light shines, the darkness is that much deeper. As the people, as the Khajiit live in the light, so things live in the dark. These are the Dro-m'Athra."

2 points in stamina, few in health if you feel it necasary , none in magicka. straight stamina monster.

Purely stamina heavy. I almost never run out of stamina with this build. balanced with the stronger Assassination skill lines using some magicka.

If you like to keep the ranged portion of your build more, stay with the extra point in magicka to keep yourself disappearing and firing poison from the outskirts of battle. or ducking behind for a quick Surpirse Attack spam.

Make sure to put skill points in the passives for medium armor and Khajiit class ASAP. also dual wield passives are your friend Dual wielding daggers will end up being your best bet, (twin Blunt and Blade) but play what your comfortable with. also recommend getting Theives Guild f and Dark Brotherhood for Passives as well. Blade of Woe makes sneaking through quest dungeons so much easier! but doesnt do much else haha.

so this is how i generally play it:

(from hidden if you have the sneak bonuses):  jump right in the fray with Ambush. with multiple enemies, spam Steel Tornado for crowd control and to manage outlying archers or mages. mostly this is all youll ever have to do with groups. ithe stamina buffs plus steel tornados damage and range turn you into a living Weedwacker. i usually have a 1/4 stamina left after taking on 3-4 enemies at a time.

Alternatively, and this is the most productive attack style.  jump in with ambush, immediately shadowy Disguise and disappear. for crowd control, turn while invisiblke and hit the other guy with surpise attakc, this should stun him long enough for you to spam surprise attack on the first guy. once he goes down, disappear again and surprise attack the second guy again, giving you time to either disappaear and attack a 3rd and 4th guy or gives you time to kill the enemy without taking any damage.

Remmeber to always finish off the enemy with Killers blade for the health restore bonus. helpful if you took a few too many pokes from a sword. Youll be a whirling cloud of leather and steel in no time.

generally i start from sneak. fire poison injection for the DoT effect, shadowy disguise again for the cric stike and poison shots at the target until they are close. then you go into shadow cloak and surprise attack then killers blade and that should finish them.

The ultimates i chose for each are respective to their bars.

Veil Of Blades for AoE damage for help with groups and bosses and damage reduction for survivabilty. i cant tell you how many times its kept me alive when youre playing rock em sock em robots, taking blows trying to get the boss or target in the 25% health range for killers blades 300% damage bonus to kick in.

Soul Harvest for Passively increases Ultimate recharge from successful kills while slotted.  Handy way of increasing your Ultimate for rapid use, or likely gain Ultimate fast enough to use a more powerful one on your weapon swap. (Also it makes you look like a badass when you have a bow equipped and still get to wield to ghostly red blades.) Could be subbed with Veiled Blades for a real ranged assassin feel once you unlock Lacerate from the Dual Wield Skill line

Edit 1/9/17: Tried PVP as Assassin for the first time last night. I seem to have best luck with a Shadowy DIsguise > Ambush > Shadowy Disguise > Surprise Attack > finish of the last of the health with Surprise  Attack or Killers Blade or both.