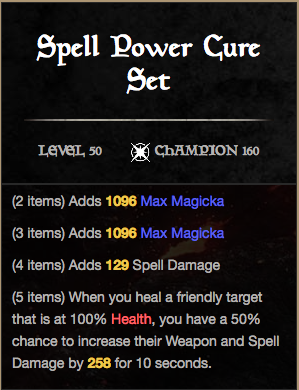 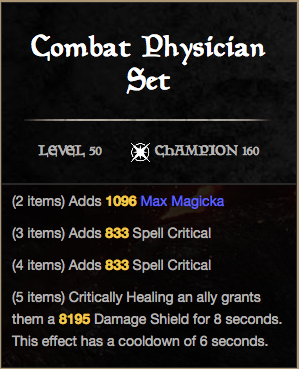 The Warden Healer is the best healer class in my opinion. The Green Balance skills make you very active and it creates a completely different way to play. You focus on your team and attend to them each as they need it as well as keep contant healing without losing magicka.

Once you get the rotation down you can be very, very, very effective. You do this by going through a rotation of your heals, but each scenario is different so the timing and arrangment will be different based on the current needs... In short, you want to stack Illustrious Healing and Corrupting Pollen (Major Defile works against healing bosses) on top of each other and keep them running constantly with smooth rotations of buff ups and heavy attacks in between bar swaps. It's a bit hard to explain, but once you play around with the setup you'll get it.

Having all of the Green Balance abilities on one bar works well for the extra bonus from the Emerald Moss passive in that skill tree. I usually always keep Leeching Vines up on the Tank and just leave him/her alone under the AoE heals while I stay aware of the DPS players using Natures Embrace to get close up on them and drop a Leeching Vines on them. I always make sure no one is behind me as I need to have line-of-sight to the whole team.

What's a really cool proc is that when you use Mutagen and you bar swap back to the Spell Power Cure staff, SPC will automatically proc on the tick of Mutagen if your team is already at full health. If not you can throw out Enchanted Growth and your whole team will get a load of buffs with the SPC proc combined with it. With Lotus Blossom running, i'll swap back to the Combat Physician staff and give a Combat Prayer. At this point your team should be super buffed up by you and you can just heavy attack, which will both heal your team (double strong with Lotus Blossom and the Healing Staff passives) and restore your magicka. So yeah... endless, constant healing and amazing sustain.

This build is a Vampire for the Undeath passive. You do not want to be the first to die as the healer, your team needs you. So it's uber important to have at least 20k health and this passive will help a ton during those big vet boss battles with some of their hard hits that come suddenly out of nowhere. Just make sure that when you take Double Bloody Mara (which lowers your Vampire stage level) you're already at stage 4 Vampirism, so that you can keep the Undeath passive which is only in effect at Vampirism stage 3 or higher.

Ward Ally is used for circumstantial reasons; i.e. shielding an ally allowing Troll King to do it's work, anticipating a big hit from a boss or you need protection while you resurrect an ally.

You'll notice I didn't choose any burst heal morphs. The reason is because the heals are very strong. So much so that, when combined with Troll King, they are nearly like burst heals. For example; Nature's Embrace takes 10 seconds to heal, while Bursting Vines is instant. However, the complete heal from Nature's Embrace is actually about twice as strong (exponetially stronger with Troll King) and it heals not just your target but you too, which works great when you need to escape from a mob swarming you. You can swing away to the best ally of choice!

So that's all I have to say... the rest has to be experienced. The Attendant is a great dedicated healer build that not only has uber heals but boosts your team and is super fun to play!

Distribute your points into the following...