Update 11, including the Shadows of the Hist DLC, is now available on PC/Mac. This update is coming to consoles on August 16 2016.

The base game is getting improvements including the option to change your race, appearance and name.

You can now buy a Name Change token from the Crown Store. Once purchased these tokens may be utilized at the character select screen to select a new name for one character. The token will not be consumed until a valid name is successfully chosen, and players canceling the change will retain their token accordingly.

Appearance Change tokens allows for complete modification of the character’s appearance, including but not limited to hair styles and colors, adornments, face and body markings, facial features, eye color, age, body and face shape, as well as selected voice.

In addition to the option of race changes there has been a general balancing of racial passives.

Return to Hel Ra Citadel, the Aetherian Archive and Dragonstar Arena! ZOS have improved these popular trials to increase difficulty and provide greater rewards. All items and weapons obtained in these trials have been updated to max level, and Hel Ra Citadel and the Aetherian Archive now feature a Normal and Veteran modes that will scale to your group leader and qualify you for the leaderboards. Are you ready to accept the challenge?

Console players have long since requested the ability to chat via text ever since The Elder Scrolls Online was released for XBox One and PlayStation4. With the coming update, console players will be able to write text messages in addition to using voice chat.

Beginning with Update 11, Cyrodiil will feature the capturable towns of Cropsford, Vlastarus and Bruma! Each town contains three flags to capture and control, one with no guards, one with a few guards, and one that is heavily guarded, in a fashion similar to district flags in the Imperial City. Capturing a town grants an Alliance another place to respawn from PVP deaths and access to town merchants selling purple-quality gear for Alliance Points. Experience this new style of PVP gameplay and win honor and glory for your Alliance!

With Update 11 ZOS are introducing dozens of new hair styles, adornments, and body markings that can be purchased from the in-game Crown Store.

Shadow of the Hist DLC

There are two new Group Dungeons as part of the Shadow of the Hist DLC.

Join the Argonians of the Dark Brotherhood in their battle against a cadre of rogue assassins threatening to hurl all of Black Marsh into bloody chaos. Fight your way through the Cradle of Shadows to uncover the secrets of the twisted Silken Ring! Cradle of Shadows is a 4-player group dungeon featuring both Normal and Veteran modes. Can you defeat its boss and claim its head as a new monster mask?

Venture into Mazzatun, the “Puzzle City” of the Argonian Xit-Xaht tribe. The tribe has been forcing other lizardfolk to work as slave labor on a twisted project that is slowly driving them insane. Overcome the slavelords and free their helpless victims before it’s too late! Ruins of Mazzatun is a 4-player group dungeon with a Normal and a Veteran modes and valuable rewards, including a new monster mask. 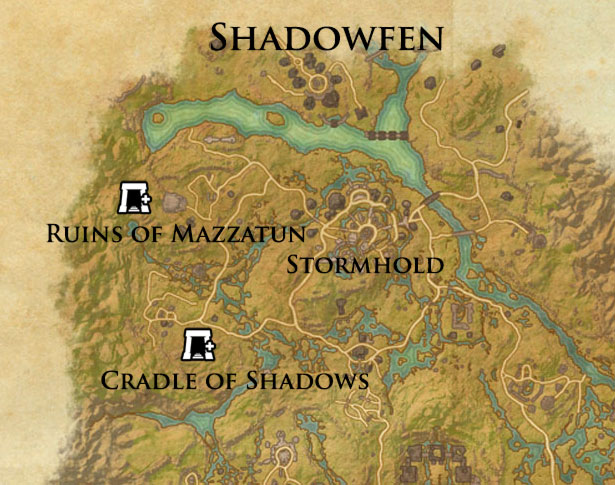