Fury of the Storm 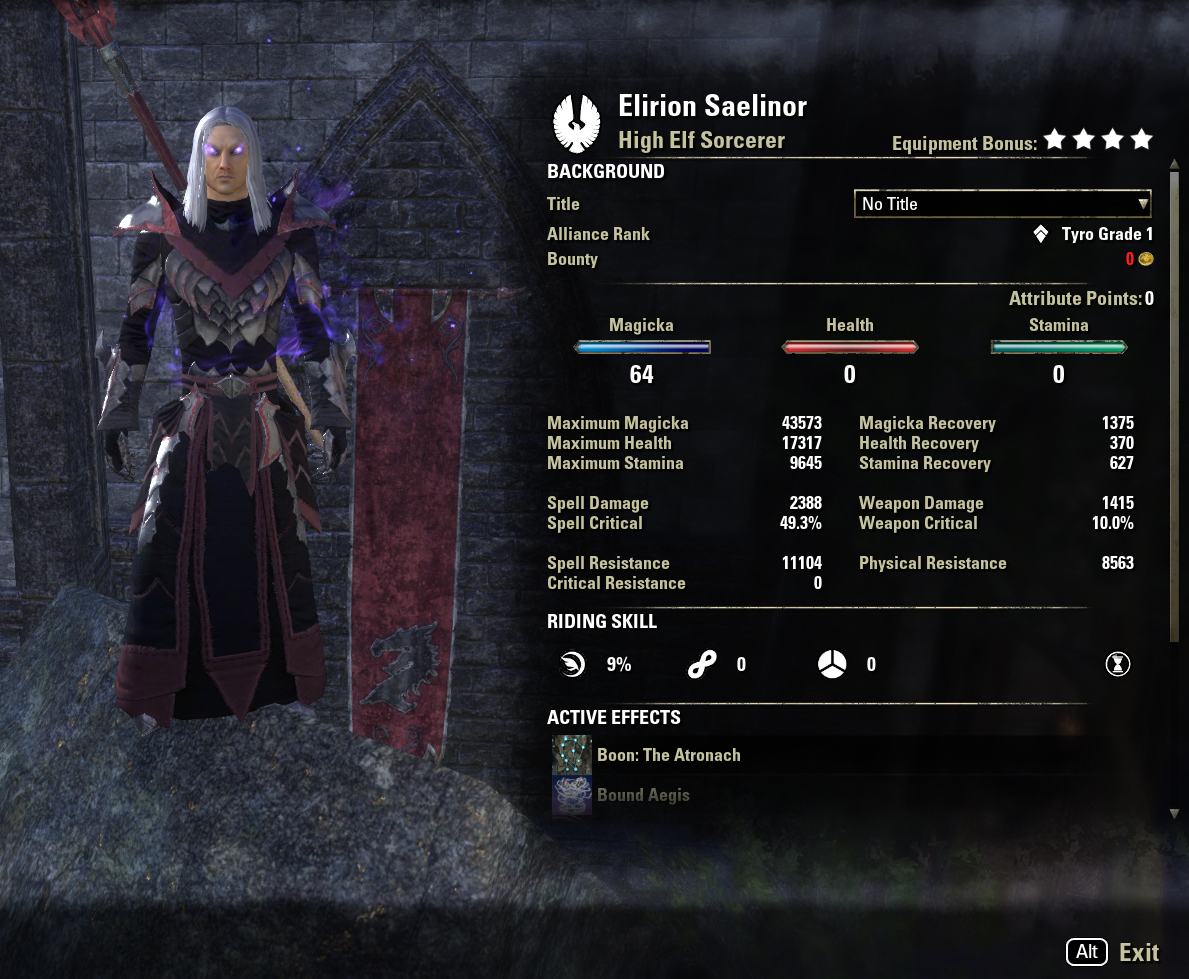 Set one: 5pc Law of Julianos

Explanation: This set provides a small magicka boost, a 6% spell crit boost, and an enormous increase to one's spell damage.

Explanation: This set provides a 2 and 3pc bonus that are roughly 140% as effective as the normal set bonuses. The max magicka is always helpful, and the spell damage is the same.

Explanation: This set provides a small boost to your spell damage. If desired, you can swap the 1pc monster mask for a 3rd piece of Torug's to boost your health. Alternatively, you can swap one piece of this armor for a 2pc Monster mask set.

Explanation: This set provides a small boost to max magicka. With two pieces, it adds an area of effect lightning attack to the build.

Location: Veteran Crypt of Hearts I

Crystal Fragments deals a sizable (12-15k normal, 20-25k crit) chunk of damage to any enemy you aim it at. The only downside is the Programmed Random OCcurrence as to when you can use it, but even this can be worked around.

Force Pulse is your main single-target attack, and can be spammed with relative ease.

Elemental Reach provides a Stun at range, and deals moderate damage over time. [Note: This skill can be swapped for something to boost DPS, such as Bound Aegis, if desired.]

Haunting Curse applies an effect to enemies that ticks twice, dealing considerable (9-12k normal, 18-22k crit) damage to the enemy with each explosion. When using this ability, you must be careful not to reapply it before the previous curse expires, or else you reset the timer on the explosion.

Greater Storm Atronach stands around and zaps things for an incredible amount of time. It can be useful on bosses that don't like to hold still or longer fights.

Empowered ward is one of the longest damage shields in the game at 10 seconds, and it applies a minor magicka regen buff which restores a significant amount of the ability's cost.

Liquid Lightning deals high damage to enemies in the area surrounding it for 10 seconds.

Elemental Drain improves your sustainability on boss fights by a significant amount, and lowers the enemy's spell resistance by 5280, resulting in increased damage (that is, if the tank isn't using Pierce Armor). [Note: This is another 'flex skill,' meaning it can be swapped for Bound Aegis or another skill if you wish.]

Elemental Rage deals 8-10k damage every second for 9 seconds. That's rather a lot. The downside is the fixed area and the high cost of the ultimate (213 with Power Stone).

Race should be Altmer due to increased shock damage, max magicka, and magicka recovery. Dunmer and Breton also work.

Attribute points should be distributed as follows: 64 Magicka, 0 Health, 0 Stamina. You can switch these numbers around if needed to shore up any weaknesses you see in the build.