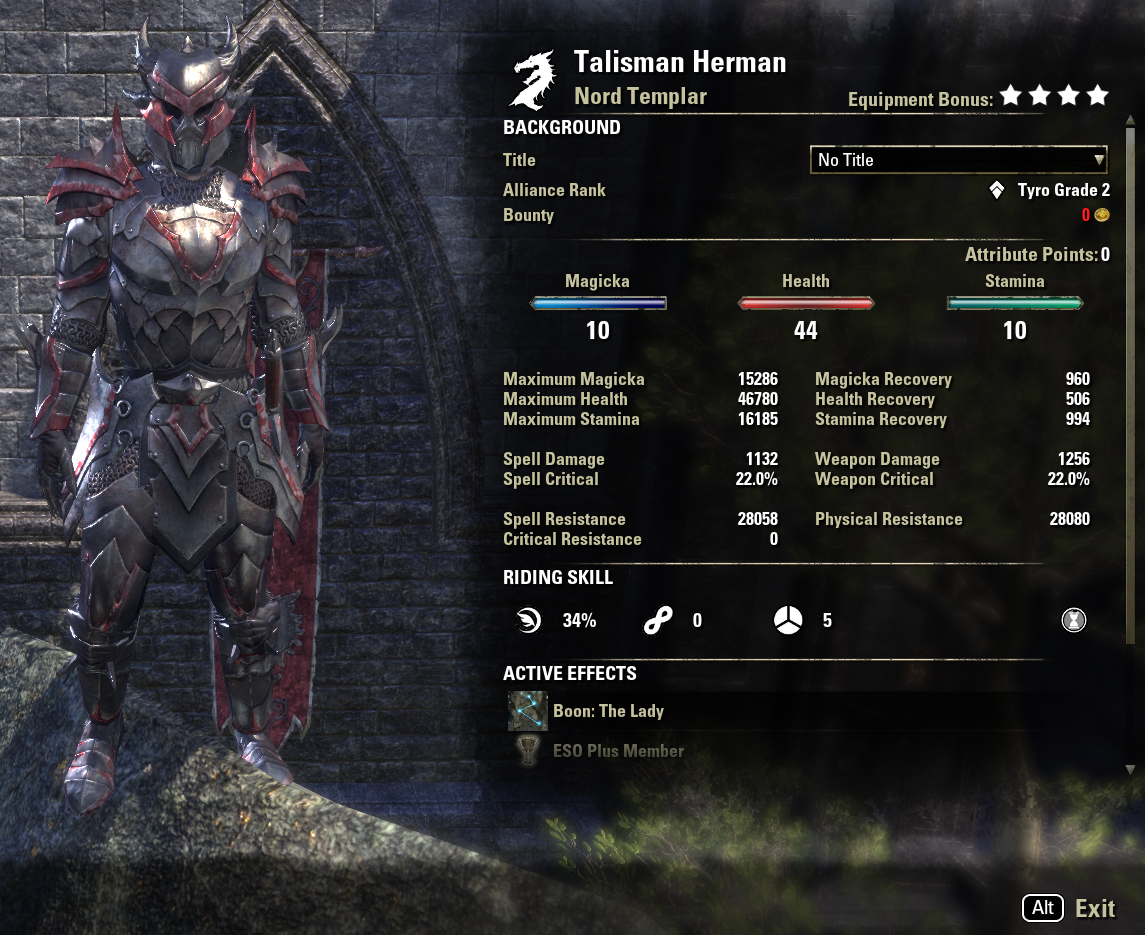 Power of the Light

Explanation: This set provides a significant self-heal that scales with the amount of attackers in an area. In areas like Skyreach Catacombs, Grobull the Transmuted, or any area with multiple attackers, this set is extremely helpful. Less importantly, it looks absolutely superb (in my humble opinion).

Suggested traits: Defending (swords), sturdy (belt), sturdy or reinforced (boots/gauntlets), infused (chestplate) [Note: Defending is no longer extremely useful with the recent nerf, but it is easy to acquire with the unique sword Warden's Courage. You can use Infused if you prefer.]

Explanation: This set provides a 2 and 3pc bonus that are roughly 140% as effective as the normal set bonuses. The max HP is always helpful for a tank, and the increased Stamina recovery will help with sustainability.

Explanation: This set provides Physical Resistance to balance out the Balanced Warrior passive from the Aedric Spear line, which provides ~2600 Spell Resistance. The extra health is exactly that: extra health.

Other sets can be substituted for these if you wish, such as monster mask 2pc bonuses or 1pc bonuses such as the Mighty Chudan or Pirate Skeleton.

This build focuses on being practically indestructible, protecting one's allies and improving allies' DPS, listed in decreasing order of importance. [Note: the image shown was taken when no buffs were applied other than food and mundus stone.]

Blazing Shield grants a large (30-36%, ~16k) damage shield. It also provides a minor amount of damage, and having the ability slotted grants a 15% increase in damage blocked from melee attacks.

Pierce Armor is the main melee taunt, and applies the debuffs Major Fracture and Breach to the enemy, increasing your and your allies' damage to the target.

Power of the Light applies Minor Fracture and Breach to the enemy, increasing damage dealt to the target. [Note: Templar Tanks are the only tank class that can apply both Major and Minor Fracture and Breach to the enemy without excessive trouble.] Also grants 3 ultimate every cast (provided the last cast was more than 6 seconds ago), and grants you and your group Minor Sorcery, increasing your spell damage by 5%.

Radiant Aura applies minor magickasteal to enemies within 28 meters, helping with group magicka sustain. It also causes the enemies to be aggro'd, and grants you 10% Health, Magicka and Stamina regeneration while slotted.

Sturdy Horn increases you and your group's stat pool maxes by 10% for 40 seconds, as well as granting a minor increase in damage mitigation. Best used in trials and coordinated dungeons. In public grouped dungeons, swap for Empowering Sweep.

Extended ritual cleanses up to 5 negative effects from you, offers a helpful synergy to your allies, and heals everyone in the area every 2 seconds.

Inner Fire taunts enemies at range, and provides a Magicka taunt in case you run out of Stamina.

Channeled Focus grants you Major Ward and Resolve, as well as the effect of 480 additional Magicka recovery while standing in the rune and for up to 8 seconds after leaving it. It has an incredibly low cost.

Honor the Dead lets you heal yourself or an ally in need, and restores 60% of the cost over 8 seconds if the target was below 75% health.

Practiced Incantation will usually save you from death, except for in the most extreme of situations. Can also be used to supplement the healer during high-damage AoE boss phases.

Race should be Nord due to 9% increased health, 6% decreased damage taken, 20% health recovery, and 6% max Stamina. [Note: It is important to have slightly more Stamina than Magicka, as synergies such as Holy Shards restore the highest of your two resource pools.] Argonian and Imperial also work.

Attribute points should be distributed as follows: 10 Magicka, 46 health, 10 Stamina. You can switch these numbers around if needed to shore up any weaknesses you see in the build.

Mundus Stone can be Lady to max out your Resistances, Lord for extra HP, or Atronach for improved magicka sustain.

Spell Shield: 2-3 points [Note: Evens out the overflow from Death's Wind, so physical and spell resistances are the same.]

Elemental Defender: 15+ points [Note: 30 points in The Lady grants a 1500 Resistance boost with a shield equipped.]

Healthy: 0+ points [Note: if you are a Vampire, don't bother with this star.]

Master at Arms: 30+ points [Note: Master at Arms and Mighty will increase the damage, and therefore the healing, of the Leeching Plate set.]