Daughter of the Night Mother 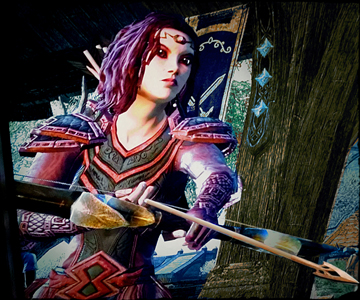 The Character runs 3 sets that are all mix and match.

My primary dropped set of choice is Night Mothers Embrace 5 Pieces 2 on jewelry (robust) and 5 Crafted Hundlings including an imp. legnedary Bow(Sharpened). The crafted legs are Heavy Armor (Reinforced) for a bit more survivability if SHTF. With less than 16K Health some bosses can hit me with a magic hit that will one shot me. so the trade off to sacrifice 1 Med Armor slot passive (all points invested) with some additional points spent in heavy Passives seems inconsequential to playstyle, I can still sneak up with 1m on any NPC. I have 55% crit chance All clothing is enchanted with Max Stamina glyphs, a combinaton of Divines/Impenetrable/reinforced once my Champion points investment Qualified for the Crit Chance perk, I switched mundas stones from Thief to Warrior (Shadow is also good depending on the scenario)Twice born star has appeal to get the combined mundas effects but the perks and wep damage of Hundlings/NMG sets is working for me.

This leaves one open jewelry slot without a set bonus which I simply used the best ring in my inventory (rangers gait) and applied an Increase Wep Damage Glyph to. On the DLC bucket list is obtaining a Maelstorm Bow at which time I'll likely swap jewelry to 3 NME pieces and craft or obtain the best 2 set bonus daggers I can. (Dreugh King) For the Wep Damage 2 Pc. Bonus.

I also banked and occasionally use a full set Witchmans Armor. the 5piece/Ultimate perk might be benificial when I give PVP a try.

Coming to the game from Skyrim I have just been enjoying the game solo. I am greatful to the guilds I have participated in that were helpful as a new player providing access to items and mats which helpped me progress with my crafting and gear development. Having never done an MMO before this type of game is new to me and don't have many friends in the game. My character build suits my Shadow/rogue/assasin lone-wolf like role-play style.

I have found I get the best damage using the 5 Hundlings/5 NME combo. My stealthed snipe hits for around 25K Damage with an additional 5K typically from Shock Damage Critical Damage. A second follow up hit if the stunned target is still alive typically seals the deal.

I will typically snipe any magic user or healer in a Mob or secondarily target their ranged archer. I use  Mark Target on one of the melee  guys and will then typically Pin down whoever is still alive with sprays of Bombard and heavy attacks. As they close range, I will then alternately use draing shot to knock them back 10 meters while targeting the other and getting a refresh of some health and stamina from the stunned assailent. Then I'll Drain shot the other while finishing the other collecting thier health from Marked Target.

Flawless dawnbreaker adds an additional 8% for slotting so my Toxic Barrage alt is on my Back Bar and typically only gets employed for long boss fights prior to transitioning to Melee. I am able to stealth kite most enemies, but occasionally things get close quarters. I know many prefer a 2H playstyle for some of the passives perks but the roleplay aspects of my character keep me bound to Dual Wield. I'm admittedly, not a great melee player (need to get better at Dodge rolling) but Dual wield on my character also hits hard and I can typicaly endure a fight by popping a slotted health potion. My couple of points investment in Magic also helps me drop into stealth to get a few moments for Regen.

To help with survivabiity and stam endurance, I have developed an Alt Low level Character Chef for cooking up Level 150 Stamina/Heath food that I typically will pull from the bank and eat prior to adventuring. The boost really adds some needed hit points and gives me a few thousand+ in damage.

The other alts I have basically are Bank mules for useful things or sellables.

As mentioned working towards Crit Bonus is important. I also put a good amount of points into Medium armor and Bow. Warlord for reducing Stamina use costs. The Ritual under tha mage also has good Damage investemnt areas.

Ranged boss Magic users seem to be my biggest obstical in game so I put points into spell shielding and elemental resistance. Stamina centric builds also can be a little squishy so I try to invest in damage protection and helth enhancement as well. The are spread pretty even to get the 30 Point bonus of most the constellations