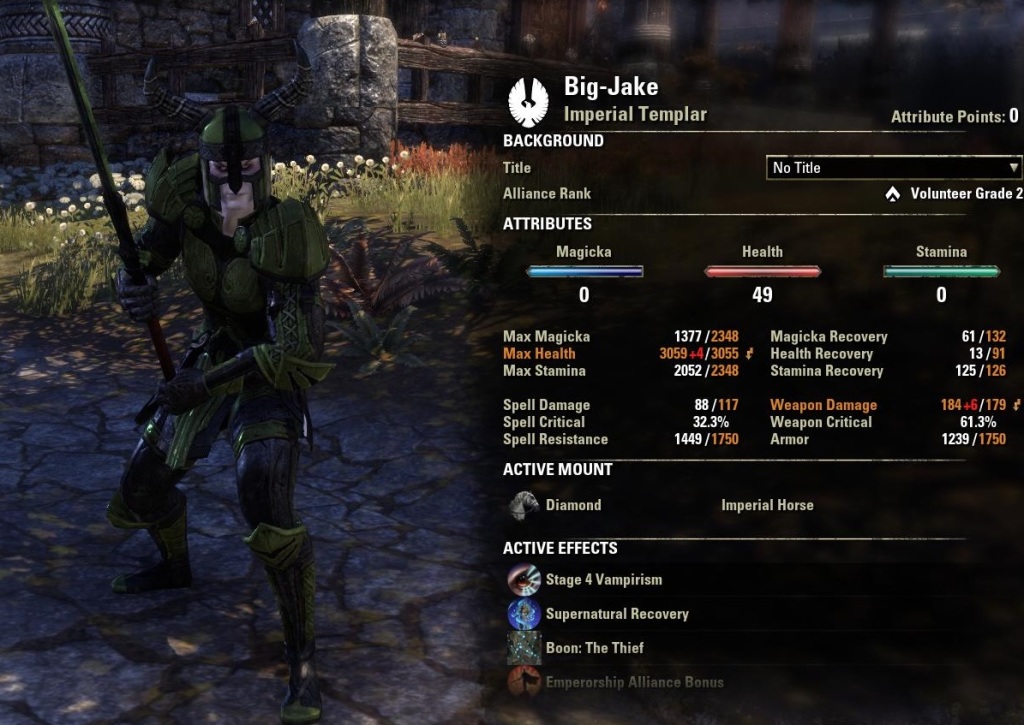 This build is meant for soloing, as in soloing ANYTHING.  I love the Templar for it’s stamina regeneration, self-heals, and shield of destruction.  The Harvester focuses on that trinity to keep resources up, dropping ultimate for health, and smashing enemies into dust.  The more enemies you’re fighting, the stronger you become.  You’ll be Carving enemies to generate massive ultimate then harvesting their dead corpses for stamina and health.  This is an absolute blast to play and I feel powerful every time I logon.

The character I’m using is Big-Jake, an Imperial race Templar.  Usually when I’m making a build, I read every single class ability and morph and design around one or more class skills.  In this case, it was Blazing Shield and Repentance.  Blazing Shield holds a shield and does damage based on the amount of health you have, thus Imperial passives seemed a logical choice.  Plus extra stamina with a two-hander and I feel this is a awesome race choice though a Redguard would have been great as well.

Second is Repentance which gives back stamina and health from nearby dead enemies.  Additionally, you’ll have near zero dependency on magicka, and use the Vampire ultimate for self-healing.  You’re generally charging into combat, generating ultimate with two abilities, then dropping bats and watching everything die.  Once they’re dead, pop Repentance to harvest their bodies and off to the next group.  If you watch my video, I’ll be taking on a Craglorn Anomaly at VR 5.  Yes, this build can literally solo an VR 11 boss meant for 4+ people.  Like every build, it has some pros and cons and here’s my list:

+ Ultimate Generation – I’ll nearly always have an ultimate up

– Low Sustained DPS – Made for survival not sustainment

– Need Corpses –  The fewer the mobs, the harder it is to survive (DELTIAS WORDS)

Bar one is your primary bar you’ll be spending most of the time wielding.  The general concept here is to leap in, getting your defensive shield up, and Carve their faces off.  Once the shield pops and your done carving, swap to bar two for a Devouring Swarm (AKA bats) to finish off the enemies.  Now Repentance to get health and stamina back then off to the next group.  It’s really that simple.

Bar two is more for sustained fights or single target encounters.  You’ll start off with a Focused Aim, Venom Arrow then lock the enemy down with Blazing Spear or knock them back with Draining Shot.  The whole idea here is to not let anyone reach you.  And if they do, swap back to bar one, pop Blazing Shield and you’ll be safe.  So let’s discuss each skill in detail. (DELTIAS WORDS)